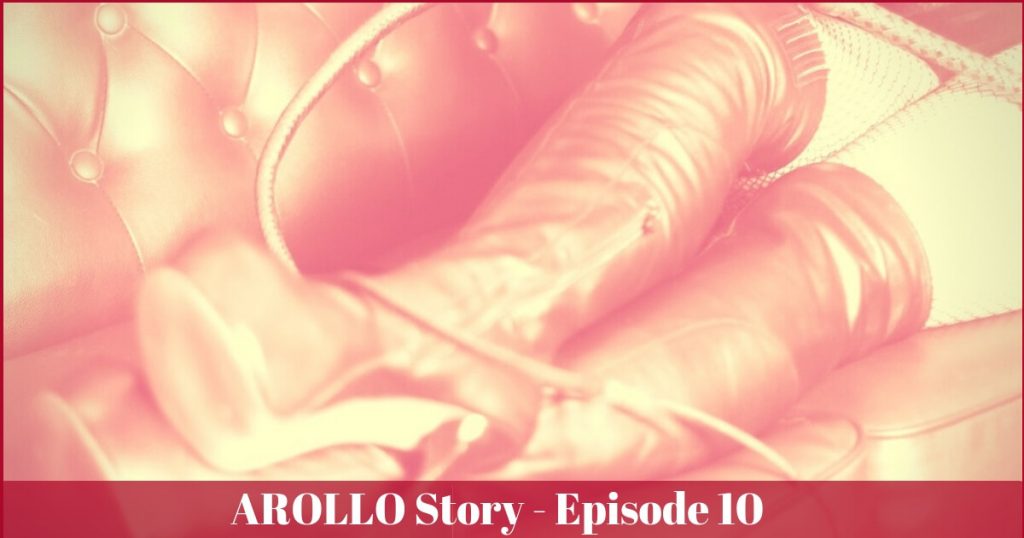 10
ALENA
The days in Ibiza are becoming some of the best of my life. I know that, even without knowing my future. Because what could ever beat it?
Already on our drive to the airport, Frank and I had to pull ourselves together, otherwise we would have been all over each other right away. If we had one of those limousines with a dividing wall between driver and passengers, I wouldn’t be able to guarantee anything. But being in a conventional cab it was impossible. I noticed immediately of course – it was somehow showing – how turned on Frank was by me wearing the Arollo Overknee Boots.

Being seen as so desirable for my husband, after all those years, also made my lust-hormones overflow. No idea how we even made it to the hotel room in Ibiza, which we barely left for the next three days. I just remember that the sex was the best one we ever had. By far.

But the real change wasn’t the boots, having been in Ibiza or the things Frank and I did together. The most important change probably was that he opened up to me. He found a weak point in himself and revealed it to me. The Overknees are his kryptonite. By filling me in, he has lifted our relationship to whole new level.

I didn’t wear the boots all the time in Ibiza, of course. That would have been ridiculous. But whenever there was the right moment, I dared do wear them – even among other people. And what’s left to say? It was an experience! Who would have thought that I turn more heads on the yard-promenade than all the million-dollar luxury-boats? A young man, who looked after me blatantly, nearly fell in the water. Not bad for a forty-six-year-old mom of two, isn’t it?

Apropos: Last weekend our two boys were visiting. I hid the Arollos, of which I own three pairs by now. The kids must have still noticed though, that Frank and I are totally different. “You became so embarrassing!” Robin said and caused a laughing fit for all of us. Yes, we are probably the most embarrassing parents on Earth right now. And the hottest.

If I had known how much passion is lying dormant in Frank, I would have gotten those things a lot earlier. But how should I have known, when even Frank himself didn’t know what he was missing? Maybe he had an intuition, but always avoided it because he thought there wouldn’t be space for something like that in a marriage. Whatever: In the end he lived past his desire for years. What a pity! But how beautiful to know that often small changes cause big things happening.

And now, pay attention: I have my kryptonite too.
I will show Frank tonight.
I’m excited to see the reaction on his face……

At this point it´s time to say thanks to all our readers. The first AROLLO Story far exceeded the expected success. What could Alneas Kryptonite be?  Write us a feedback with your thoughts, let’s see if you are right.